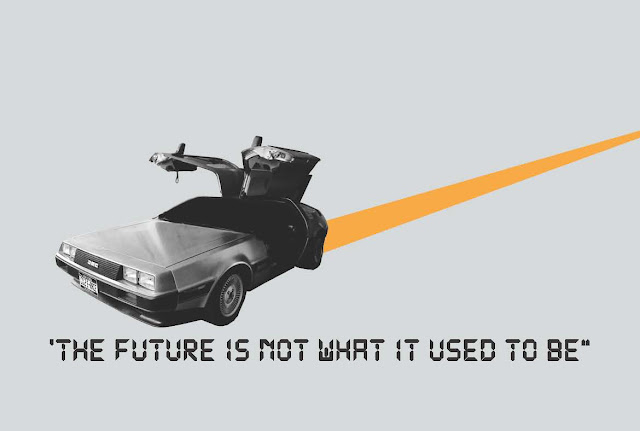 On April 5th 2013, The CO2 Green Drive Project will host the event "The Future is Not What it Used to Be" in Copenhagen's Dome of Visions. It is placed on Krøyers Plads in the Christianshavn area,  just across from the noted restaurant NOMA and on the actual spot where the legendary Copenhagen Beach Club Luftkastellet was placed. 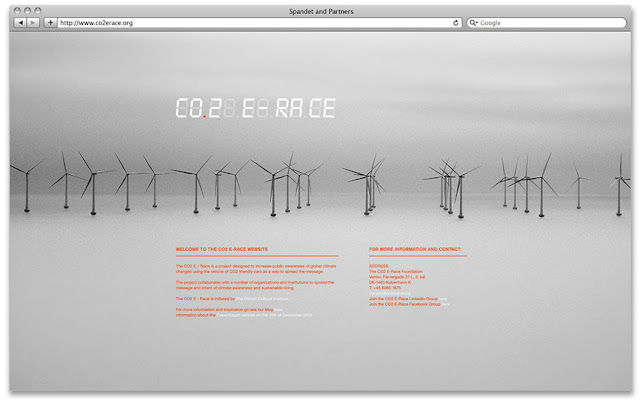 The CO2 Green Drive Project sprung out of The Triangle Project in 2008, but the artists as part of The Triangle Project have been part of the CO2 E Race/CO2 Green Drive Project all along.
One of the main collaborators have been Romeo Vidner at the Copenhagen based Design Agency re-public, as he also created the Template Portfolio of fonts, design, logos, colors and state of mind the graphic profile for CO2 E - Race/CO2 Green Drive should have. The portfolio was recently featured in the book "Green Graphics" published by INDEX BOOK. 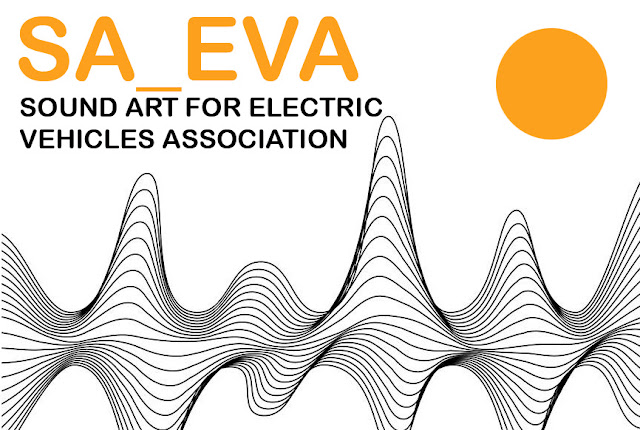 The other Triangle artists involved, have been the large group of Sound Artists, who performed in connection to the Istanbul Art Biennial in 2007. They will also be the building foundation of SA_EVA (Sound Art for Electric Vehicles Association) and on April 5th 2013, Occupy Sound for Electric Vehicles in general, forever after. If not, the area will be completely taken over by the Car Industry. This is a whole new arena for the Art of Sound, and should be dedicated to creating a new outlet for Sound Art. Sound that both has a practical use in traffic, but also plays inside the Electric Vehicle. Free Artistic expression relating to the Intentional Art Concept Framework of CO2 Green Drive, will be part of the final exhibition of the project, where the Sound aspect will have a big part.

I Am Yasuni is a global campaign to spread social awareness of Ecuador’s Yasuni-ITT Initiative in order to indefinitely preserve approximately 180,000 hectares of virgin rainforest that is comprised within the unexploited Ishpingo, Tambococha, and Tiputini (ITT) oil fields, in Yasuní National Park. In order to achieve this it aims to secure donations for the UN-administered Yasuni ITT Fund. 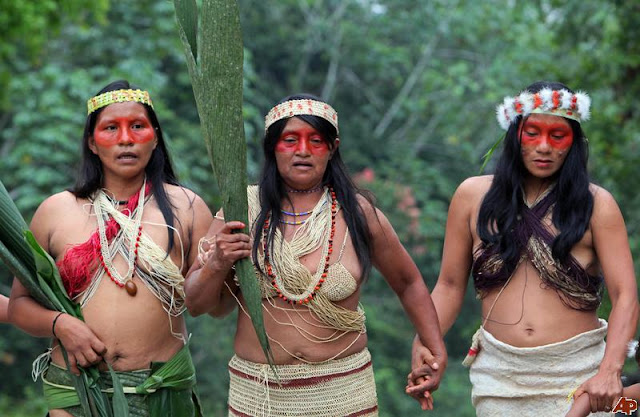 On April 5th 2013, the Danish organization "Jeg er Yasuni" will present thier project in collaboration with the CO2 Green Drive at Dome of Visions. 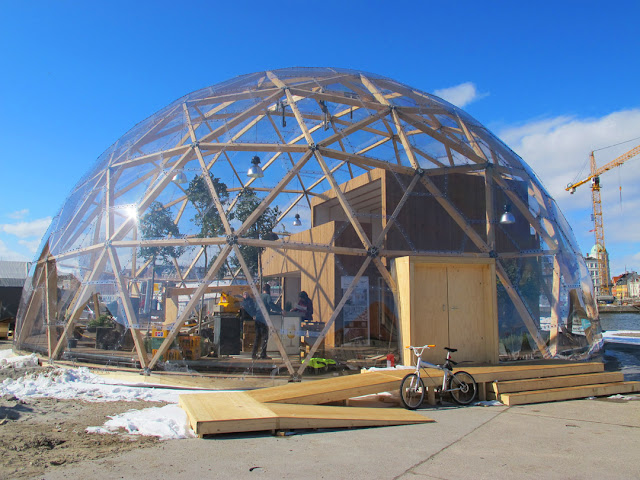 The above Dome where the event will take place, is 10,5 meters in height and has a diameter of 21 meters. The shape of the Dome is inspired by American futurist and architect Buckminster "Bucky" Fuller who, among other things, studied minimalistic constructions and patented the geodesic dome. The Dome itself acts as a façade and a shield from the elements which enables whatever construction that goes inside to use a minimal amount of materials. 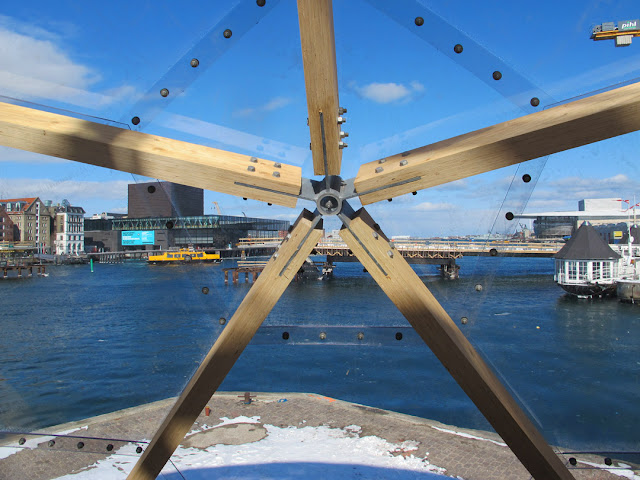 Looking North East when inside of the Dome, on the left you can see the recently buildt Theater and on the right, The Opera given to The Danish Queen by Mr. Burns. Out of the photo to the right is NOMA. 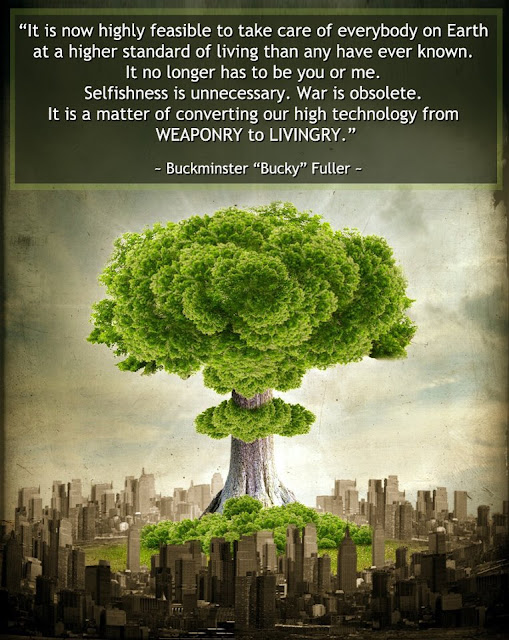 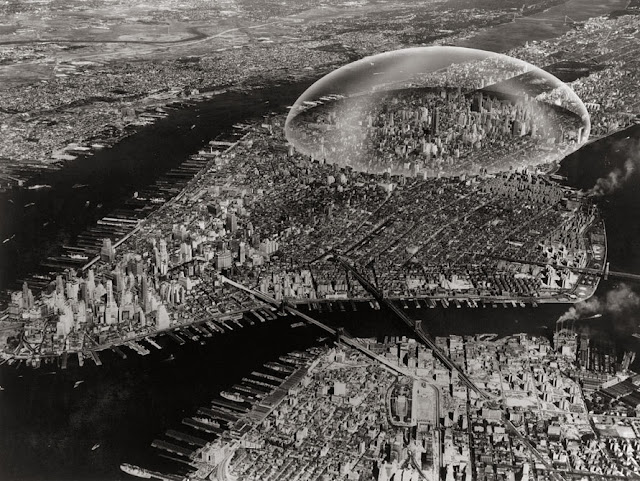 Bucky had a great plan to cover New York City with a huge Dome, as seen above. Soon in connection to Earth Day New York's annual CO2 E Drive, New York will once again be tagged with a Huge "E" by Electric Cars on the CO2 Green Drive Smart Phone Application.

More about Dome of Visions HERE

Email ThisBlogThis!Share to TwitterShare to FacebookShare to Pinterest
Labels: Buckminster Bucky Fuller, CO2 Green Drive, Dome of Visions, Intentional Art, Luftkastellet, noma, SA_EVA, Sound Art for Electric Vehicles Association, Tesla, The Future is Not What it Used to Be, yasuni